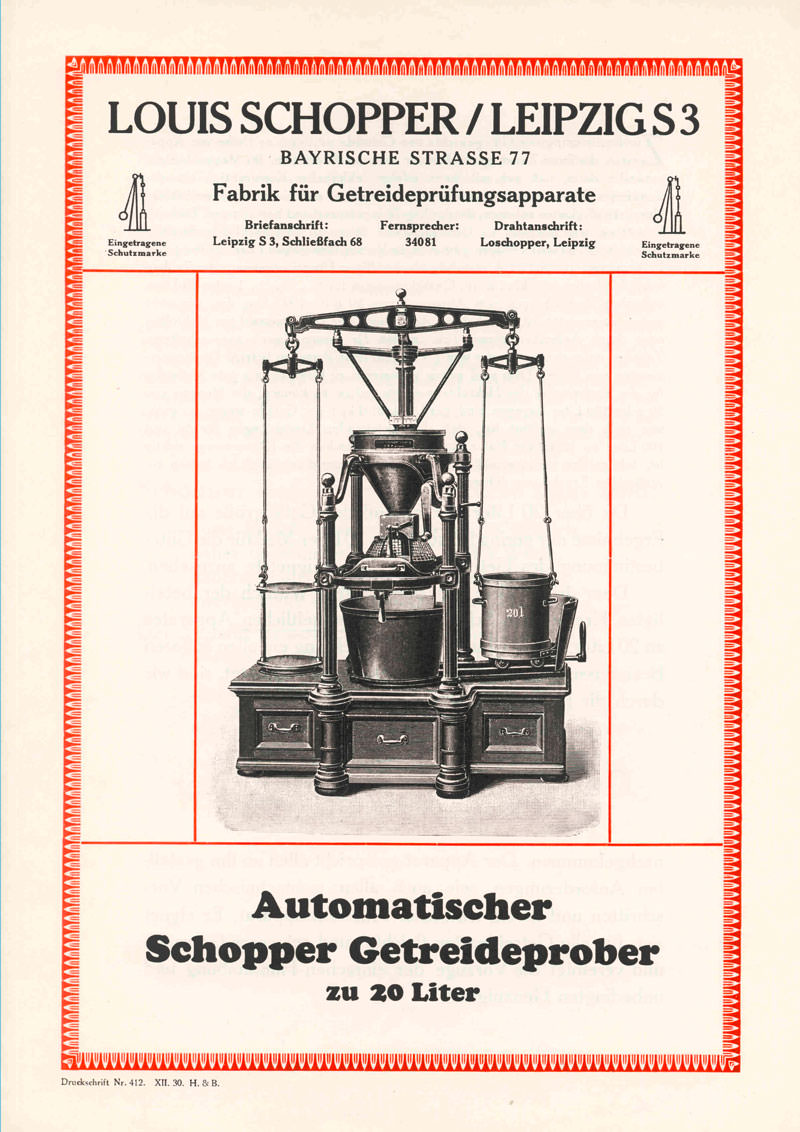 The company has its roots in the workshop founded by the mechanic Louis Schopper on 11 August 1881 in Leipzig. In the beginning, scales to measure the weight of textiles, paper and corn where produced.
From 1890 on, the first strength testing machines where delivered. The product range was extended and covered the development and production of material testing machines and devices for tests of metals, rubber, textiles, paper and corn. A significant part was the production of strength testers up to 10 tons.
The number of employees increased steadily: When the company was founded, 8 subworkers were employed, 1918 the company had more than 250 employees and in 1935 the number had reached about 450. The Schopper products from Leipzig were famous for their quality and reliability, leading to an increasing demand.

As a result of World War II, half of the facilities were destroyed. After 1945, the production plants were poorly rebuilt. The firm was transformed into a soviet corporation. The number of employees reached 1000 in 1952. Over 75% of the production was new developments. The product range was extended by strength testing machines up to 1500 tons. Moreover, machines for dynamic tests of materials were newly developed. The product range was completed with hardness testers and pendulum impact testers, including testing machines for rubber, textile and paper tests.

On 4 June 1952, the company was nationalized and renamed to "VEB Werkstoffprüfmaschinen Leipzig". The focal point of production in the following years lied in tensile testing machines and the range of hardness testers, pendulum impact testers and compression testing machines. The machines proved themselves for their high quality in many countries of the world and gained a good reputation. VEB Werkstoffprüfmaschinen Leipzig became the largest manufacturer of testing machines in the Eastern bloc. In the beginning of the 1980s, the product range was extended by servohydraulic testing machines for dynamic tests and durability tests. This way, the company not only corresponded to the latest technological developments, but also satisfied the needs of the market and the growing demands of the customers. By this technic, the company could come up to the high demands when fulfilling the specific wishes of the customers. 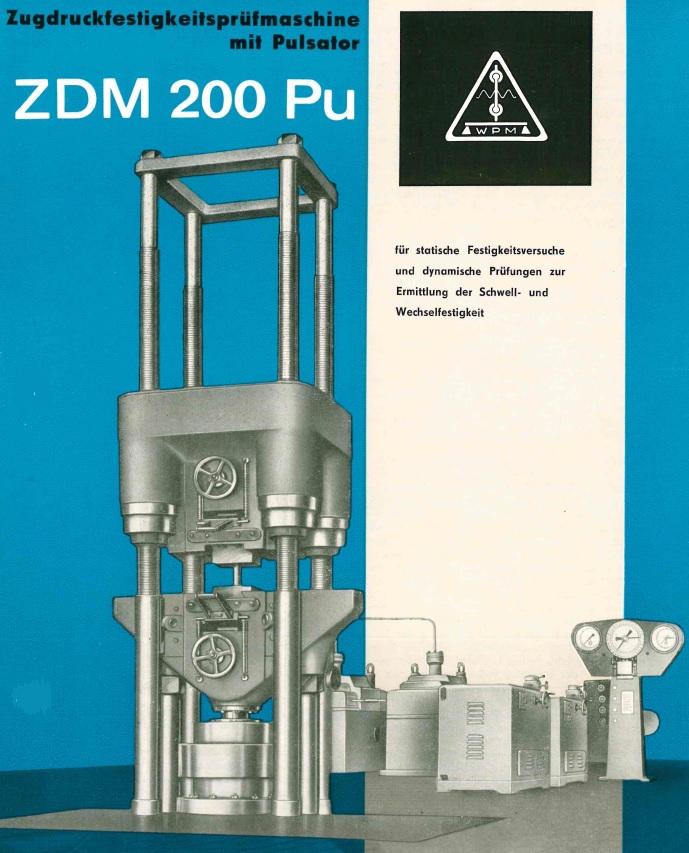 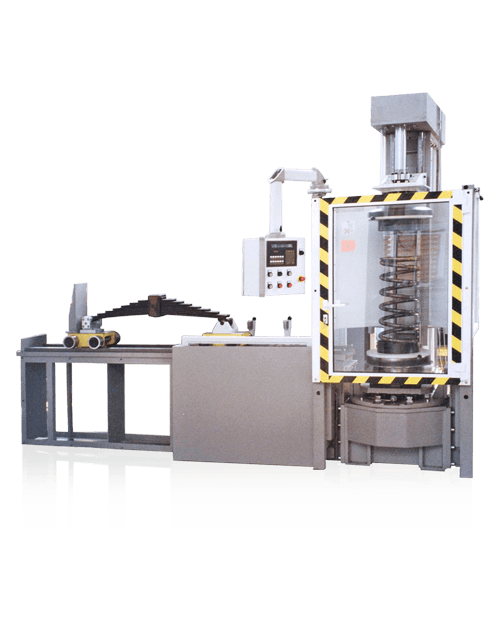 Upheaval after the Reunification of Germany

After the unification of the two German countries, the plant was transformed into a private stock company with a lot of effort and courage in 1990. The structure of the company "Werkstoffprüfmaschinen Leipzig GmbH" was adapted to the requirements of the market. The product range was tightened up and step by step the proven products were modernized and further developed in cooperation with high-specialized partners, e.g. Bosch-Rexroth, MOOG and GTM. With the experience of the company's specialists and new economic possibilities, especially high-quality electronics, the most different customer wishes could be fulfilled. Extensive support for the user and a professional service made it possible to continue the well-known tradition of the company.

Merger with TIRA and Egenolf Prüftechnik

In the following years, the core business consisted of the development, production and support of hydraulic testing systems, especially material and construction component testing. Customer-specific machines made up a large part. The product range was completed by static universal testing machines, spring testing machines and pendulum impact testers. The range of services also included the modernization of older machines, service, maintenance, spare parts, repair and calibration of WPM products. 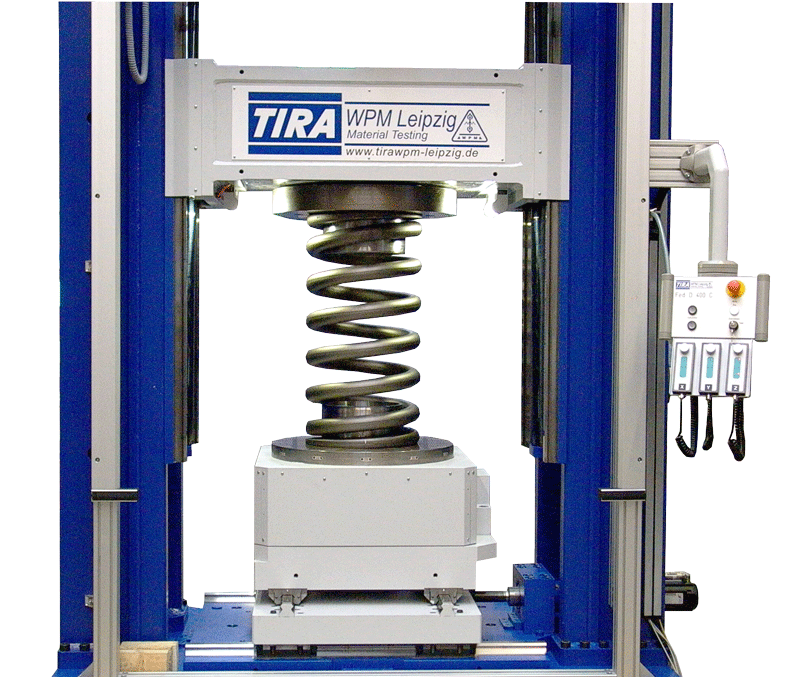 After getting insolvent in August 2019, Kögel Werkstoff- und Materialprüfsystem GmbH was found, a company now continuing the product range of WPM and to providing customers with WPM testing machines with service and spare parts.