Our hardness testers serve to determine the hardness of steel and metals of all types based on Brinell, Vickers und Rockwell. Mainly, they can be applied with cast iron, untempered steel and light metal.

We can also offer hardness reference plates and calibration for your hardness tester. 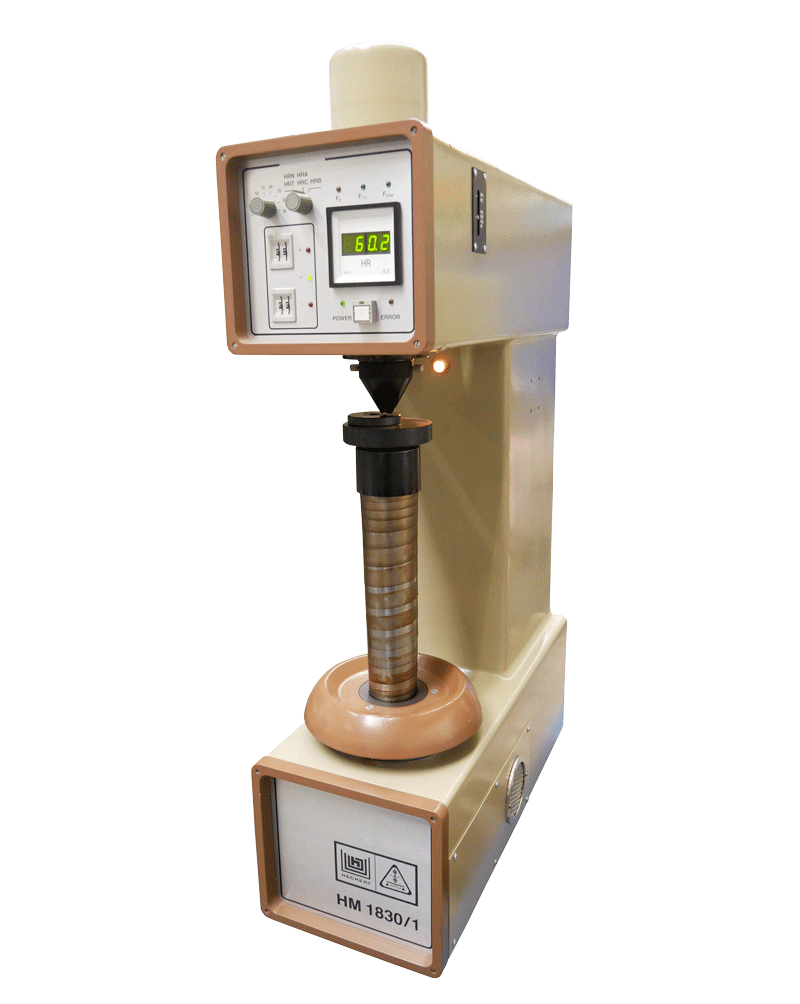 The hardness testers of the HM series are used to determine the hardness according to Rockwell. They are characterized by:

The measurement results are free of dynamic influence thanks to the massless application of force.

The HM hardness testers are table-top devices for the Rockwell test method in accordance with ISO 6508. The digital display allows direct reading of the Rockwell hardness according to the previously selected method.
The HM 1810 model is suitable for normal applications because of its simple and safe manual operation. With the HM 1830/1, the preselection of the duration of the force, the preselection of the tolerance limits and the visual display of compliance with the tolerance limits ensure a quick and precise evaluation of the results. 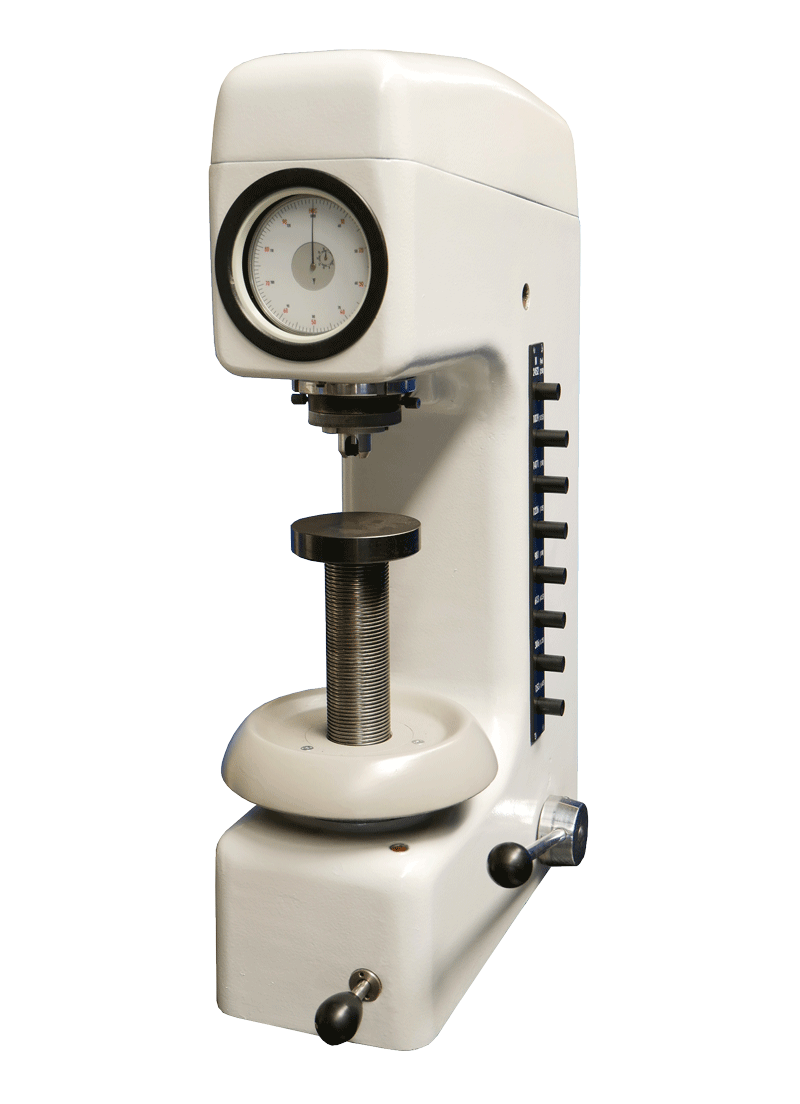 The HP 250 hardness tester is used to measure the Rockwell hardness of metallic materials according to ISO 6508-1. Due to its completely closed design, the device is protected against dust, so that it not only meets the needs of laboratories, but also the requirements of workshops and hardening shops.
A handwheel is mounted on ball bearings on the lower part of the frame and a spindle is screwed into its central bore. A test table is attached to the upper end of the spindle. Turning the handwheel raises or lowers the spindle with the test table.
The force levels are selected by the push buttons on the right side.
The hardness values can be read directly on the scales of the dial gauge. The dial of the dial gauge is indirectly illuminated. 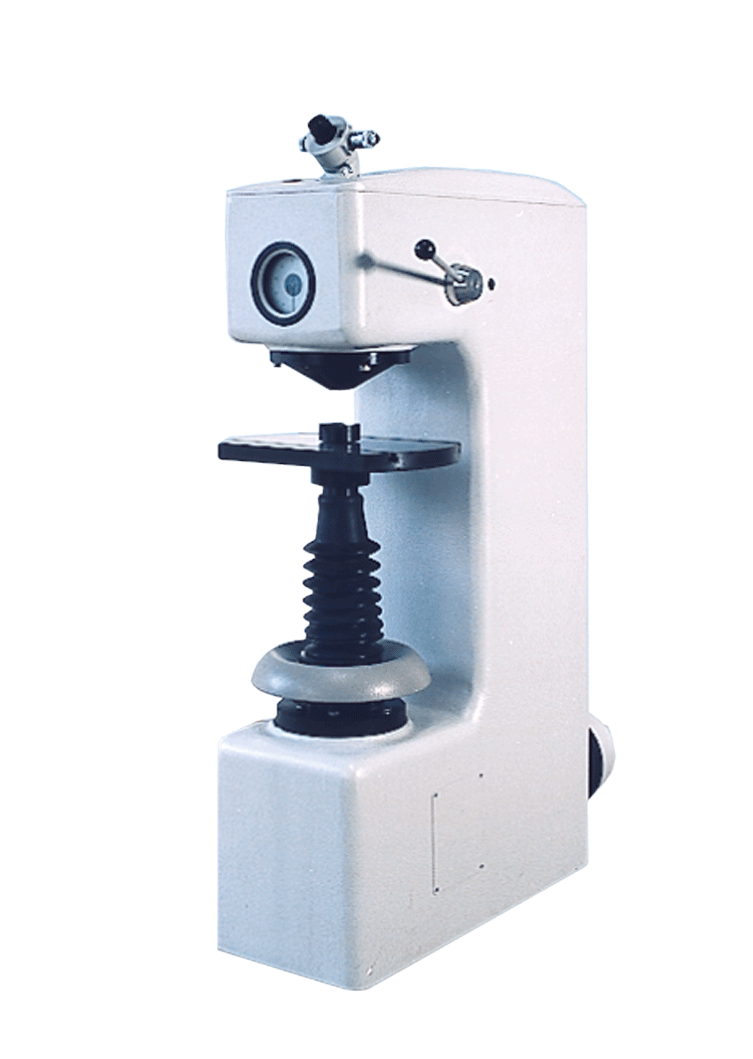 WHAT IS BRINELL HARDNESS TESTING?

In the Brinell hardness test, a ball of diameter D is pressed into the specimen with a force F and the diameter d of the indentation left is measured (evaluation using a measuring microscope or a suitable measuring magnifier). The process is preferably used for cast iron, unhardened steel and light metal up to a Brinell hardness of 450 HBW or 300 HBS.

WHAT IS VICKERS HARDNESS TESTING?

A diamond indenter in the shape of a right pyramid with a square base is pressed into the surface of a specimen and the diagonals d1 and d2 of the indentation left in the surface after the test force F is removed are measured. The method is suitable for testing all metals as long as their impression is visible in the optical projection device and can thus be measured. The test forces are between 49.03 N and 1177 N. For these test forces, the hardness value is independent of the test force. The Vickers hardness test is particularly suitable for small, hard and thin test specimens and for determining the hardness of case and nitrided layers.

WHAT IS ROCKWELL HARDNESS TESTING?

In the Rockwell hardness test, the indenter (diamond cone for the HRA, HRC and HRN methods, or steel ball for the HRB, HRF and HRT methods) is pressed into the surface in two stages and the permanent penetration depth of this indenter is measured.